I started painting this pair quite some time ago, putting into practice some of the technique I learned in Jen Greenwald’s class on painting whites. I finally put the finishing touches on them last night. Now I want to play a cool psychic character. I don’t even know if they get familiars or anything. 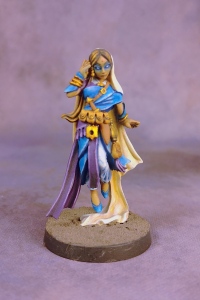 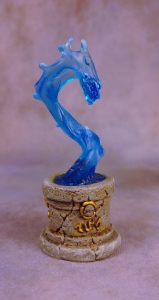 I painted this mini for my friend TempestDash. He and his family are big fans of Disney princesses and Rapunzel from “Tangled” is their favorite. I did my best to represent her using this Dark Sword mini. I love Patrick Keith’s sculpts. I also love Jessica Rich’s paint jobs featured here http://www.darkswordminiatures.com/shop/index.php/miniatures/elmore-masterworks/dsm1187.html – my first attempt at painting the breasts didn’t look so great so I was able to use the close-ups to get them to come out much better.

My camera was not cooperating today and these pictures didn’t come out too great so I may put them in the “reshoot” bucket (though I’ll have to do it soon, since I’m giving her to TempestDash in less than a month). 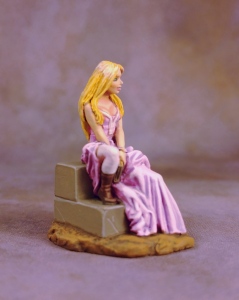 My friend TJ came over today to paint, and I painted this custom HeroForge mini he ordered. She’s apparently a Yuan-Ti pureblood PC in one of his games. There was some concept art with green eyes and purple clothing, so I used that to start with.

All told, around 4 hours. I’m quite happy with how she turned out… sitting and chatting and not agonizing over every decision made her fun and fast to paint.

Now, about the mini itself. Here is a fully zoom-in version of the image above. You can easily see the 3d printed layers, particularly on the base (which appeared not to have been perfectly horizontal in the printer), and on the raised arm. The picture doesn’t necessarily draw attention to the same areas as the eye, but it’s pretty obvious the layers are there if you spend any time looking at the mini. That said, for a tabletop piece it should be fine and the material itself took primer (and thus paint) just fine. The material had some flex to it, and there were only a few supports. Several small details were noticable, for example the details on the bag and the eyebrow piercings (which I didn’t paint), but she was supposed to have more defined abs, which didn’t show up. I don’t think light sanding would have helped much – you would have to take off enough that you’d be seriously damaging the mini at that point. At $30 a pop, they’re very expensive, but I could see it be worthwhile for a beloved character. 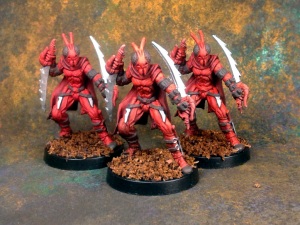 Foes for my Curse of the Crimson Throne campaign.  Trying out the Daler-Rowney Flame Red ink I picked up recently.