More text to come later. Chris’s Legion of Everblight (Thags1, CotD) attacks a remote Khadoran town defended by Zerkova1 (Jaws). Thags has to retreat before his mission can be accomplished, but Zerkova can’t consider it a success either, considering the major damage done to the town.

The quiet village of Danstowne.

Unpacking is hard for the Nyss and SUPER hard for Khador.

Marauder murders Zuriel after Zuriel leaves him with a Cortex and 1 working arm. 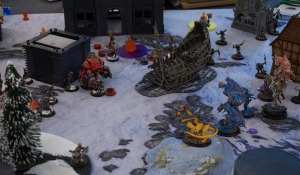 Zuriel is back, Marauder gets shot to death by Azrael.  Typhon manages to kill like 1 Nyss hunter with all his sprays.

Zuriel #2 kills the Kodiak.  Bayal is the only Hex Hunter left.

My friend Chris came over to play last night. He brought his Cygnar vs. my Khador. I had a couple lists so I asked if he had any preference. He said that he wanted to practice against Legion of Steel, since he was a bit worried about that matchup. Typical Cygnarian lies. Old Witch 2? Don’t take meaningful shooting. Lots of single-wound infantry? Take Stormlances and electro-leaps. Being a true son of the Motherland, I made the mistake of assuming my opponent would fight fairly and with honor.

(I don’t actually think Chris intentionally picked rock into my scissors, but being a true son of the Motherland I would never let truth get in the way of good propaganda)

A derailed cargo train has attracted the attention of both Cygnarian and Khadorian troops, led by Striker and Old Witch respectively. 3 big obstruction in the center of the board are going to play havok with charge lanes, while a frozen lake and forests on each side will cause problems for both mostly-pathfinderless armies. Old Witch won the roll off and chose to go first. Striker chose the side of the board with only one bit of rough terrain.

(Top of 1) Khador advances, with a unit of Iron Fangs moving down each flank. Critically, the unit on the far side cannot move far enough into the forest to see out of it. The gap in the center of the table is well protected by a zillion counter-charging solos.

(Bottom of 1) Stormlances move out to flank both side of the board, staying out of charge range of the Iron Fangs. Rebuke goes on the near Fangs, dramatically limiting their potential. Striker moves behind the locomotive to potentially threaten the other side with Velocity.  Literally everything stays out of Old Witch’s sight and/or range; they are very afraid of her gun.

(Top of 2) The far pikemen attempt to jam the lances and prepare to receive a charge.  The near (Rebuked) pikemen spread out to minimize electro-leaps.  Destroyer kills one lance and does serious damage to another.  Middle unit of solos and min fangs attempt to take the center.

(Bottom of 2) So, it turns out that when Stormlances are facing their favorite prey, they’re pretty good.  The far unit is completely wiped out once Junior and the Firefly cleared up some jammers, and the near unit kills everyone they can get to.  Stormblades in the middle don’t have a ton of targets, but kill a couple Fangs and don’t give me any particularly good targets.

(Top of 3) The attrition swung HARD last turn so it’s going to be a serious uphill battle.  I’ve lost 40 points of troops to his 4.  I have to respect Striker’s assassination potential, which seriously limits my options.  Destroyer and near pikemen kill off most of his troops on that side of the board, while the Juggernaut murders some lances.  Old Witch’s gun makes the center of the board a no-go zone for the Stormblades, and 5 counter-charging weaponmasters make it a no-go zone for Striker.  Works gets done, but attrition is still dramatically in his favor. 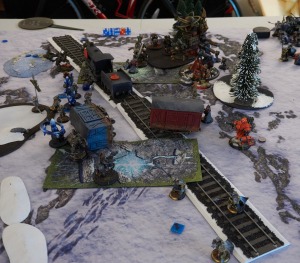 (Bottom of 4) Striker feats, and the Stormclad + Lances take out the Juggernaut, while the Lancer and remaining Stormlance kill a few pikemen.  Center of the board is still a death-zone for Striker.

(Turn 5) Old Witch goes after the Stormlances and Stormclad and gets some below average rolls, leaving the Stormclad alive.  Because of this, her counter-charging protection can’t stop Striker from coming around the locomotive the other way and killing her.

Stormlances are still stupid good.  Even with their recent nerf, they’re so much better than Uhlans it isn’t funny.  Old Witch was a pretty terrible choice for caster in this matchup – Zerkova1 would have been amazing with all those obstructions to Ghostly through.  Sylys would have been way better than Reinholdt in this game, but I think they’re still pretty even for value.  Eilish for disbinding would have been huge in this game.  And of course, Privateer Press hates on Khador for no apparent reason and I can’t take character merc units.

Playing with some actual terrain made this game much more interesting than the typical shooting-gallery table.  I haven’t been playing much recently so having to think harder about terrain may not have been the greatest.

Aside from 6 partially-painted pikemen, we had two fully-painted armies.  My terrain needs a little work, but there was nothing completely uncolored.